How Kathy Came to Be Here

Kathy Skubik is committed to supporting the health and wellness of others. Born to a strong-willed, single mother and raised with an unconventional holistic lifestyle, Kathy learned early on that there was much more to wellness than traditional medicine and what was considered the norm in the ’60s & ’70s. Her mother’s approach to nutrition, exercise, massage, and respect for Planet Earth shaped Kathy into the holistic health advocate she is today.

As Irene Gauthier’s daughter, Kathy grew up experiencing massage and bodywork as a normal part of everyday life. In her infancy, Irene’s clients gave Kathy her bottle as they sat under the hairdryer and Irene practiced reflexology on their feet. Kathy has countless memories of her mom practicing massage in the basement of her childhood home. Attending massage conventions with her mom exposed her to a variety of bodywork modalities and natural health practices.

When Kathy was a teenager, Irene began teaching massage in their basement. All of this provided Kathy with a broad knowledge of massage and complementary healing, and an unconscious sense of their positive effects. 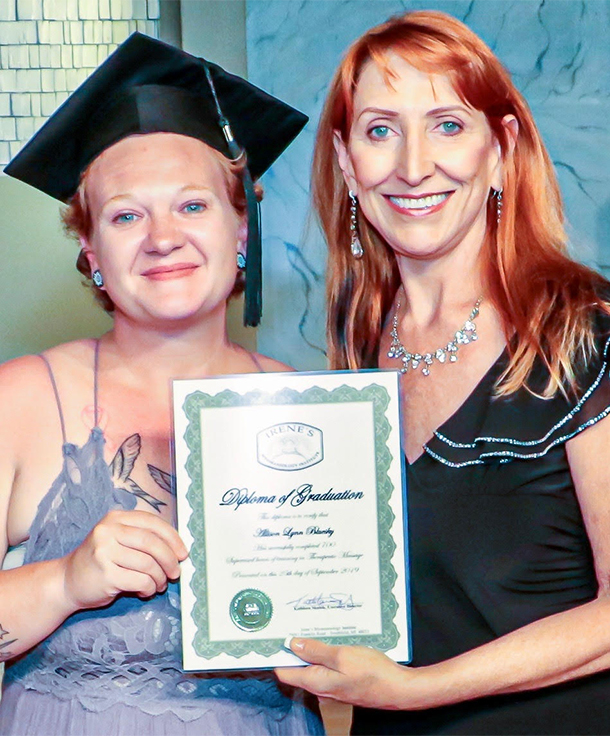 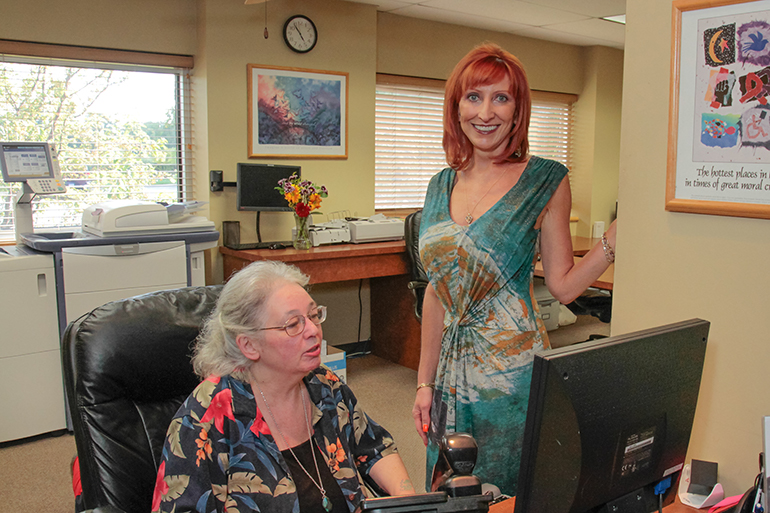 During her college years, however, Kathy rebelled against that healthy lifestyle with drinking, smoking and drug use. She spiraled into negativity and struggled with depression. After college, she took a job at a pizza restaurant where her diet went from bad to worse and she gained 60 pounds.

During that dark time in Kathy’s life in 1987, Irene opened a state-licensed massage school with one of her teaching assistants. Irene urged her daughter to come work for her at the new school, The Myomassethics Center on Southfield Road. Kathy identifies this as the turning point that saved her life and lifted her from depression.

One of the many benefits of working at the school was its positive influences. The teachers and students were health conscious and committed to personal development. Weighing in at 185 pounds, Kathy joined a health club and began exercising for the first time in her life. Over the next year, she lost the 60 pounds she had gained and gradually began to feel happier.

This positive influence led Kathy to attend personal development classes that helped to boost her self esteem. Shrugging off the cliche of “Self Help”, she actively sought out any opportunity to grow and learn by attending retreats, seminars and various therapies. She enjoyed incorporating many of this aspect into the student’s school experience. 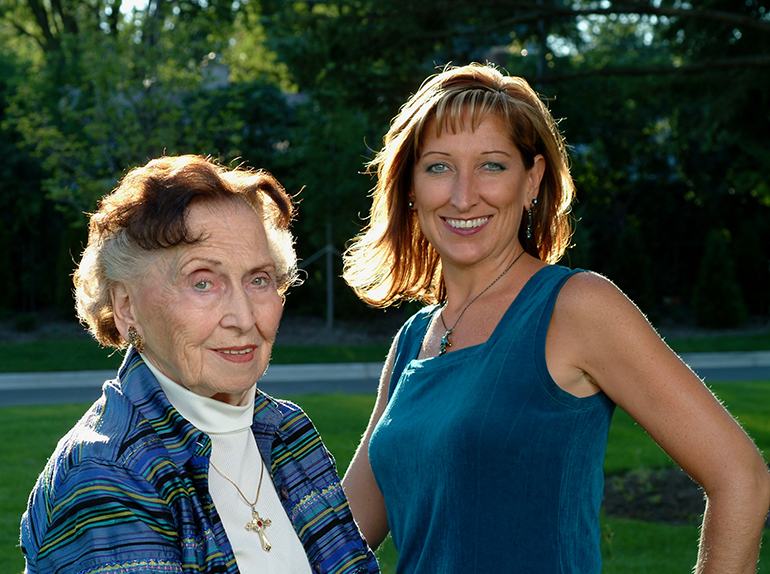 The plan at first was simply for Kathy to take attendance and collect tuition before class. However, she quickly began to identify how systems could be improved and started creating new school procedures. Over the first few years, she went from part-time employee to literally run the office. She re-wrote the school catalog to be in alignment with standard educational policies.

Realizing students needed a place to buy their massage supplies prompted her to expand and open a small bookstore. After five years, Kathy convinced her mom to make her a full business partner. She found a new location for their massage school in Southfield on Ten Mile Road. In January 1993, Irene’s Myomassology Institute was formed. 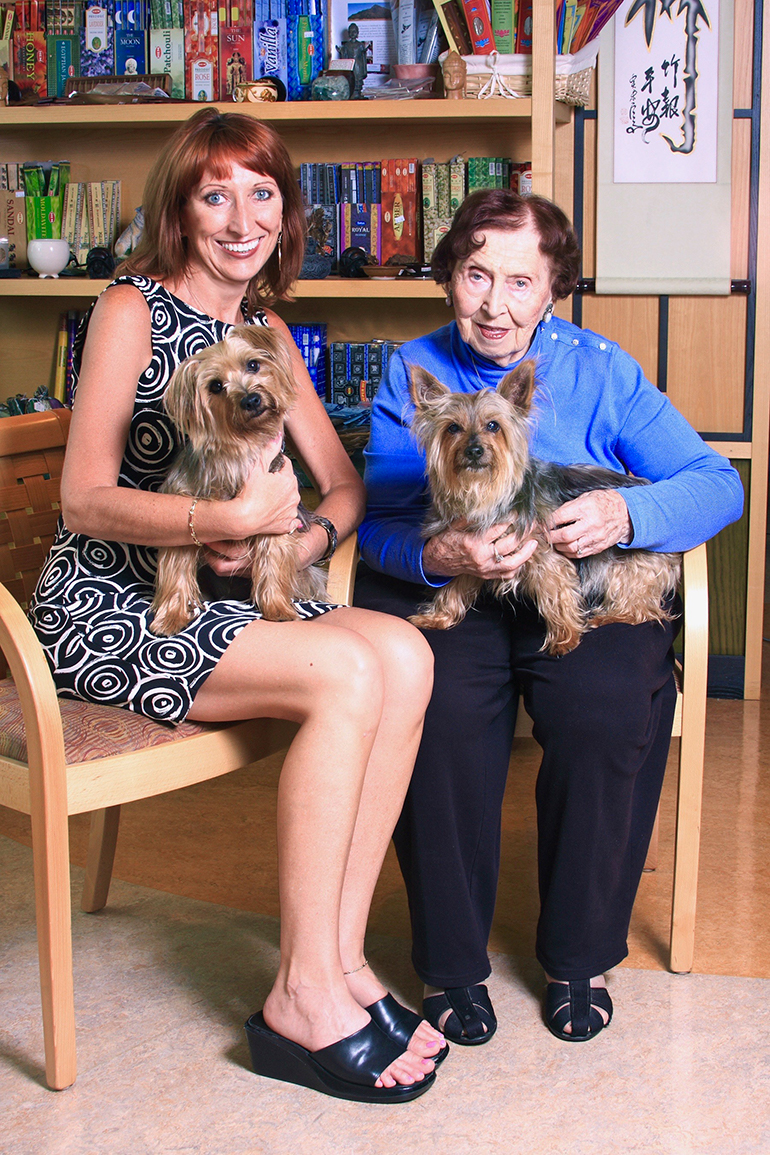 Just as Irene had an innate ability as a healer, Kathy was a natural at managing and developing the school. Together, mother and daughter grew the business over the coming years as it became the much beloved Irene’s of today.

While Irene was busy sharing her wisdom in the classroom, Kathy worked hard behind the scenes, dedicating herself to providing the best educational experience possible.   Having a Bachelor’s Degree in Communications, she felt furthering her own education in business management would be advantageous so she returned to school to earn a Master’s Degree in Administration. At the same time enrollment increased, and Kathy expanded the massage school three times from 3,000 to 8,000 feet.

Having made a commitment to quality, Kathy took on the daunting task of earning National Accreditation for the school. After achieving initial three-year accreditation in 2001 through ACCET, Kathy continued to refine the school’s policies and procedures until in 2007 the school received a coveted five-year accreditation, the highest level an institution can earn.

She has continued to maintain five-year accreditation ever since. At one point ACCET asked Kathy to be part of a task force to help establish curriculum criteria specific for massage therapy schools.

As they outgrew their facilities on Ten Mile Road, the two decided to build a state-of-the-art massage school. After purchasing property, Kathy’s goal was to create an environment in keeping with the school’s mission and reputation. She immersed herself in the design and building process.

“I knew we needed a space that would honor and express Mom’s lifetime commitment to whole-body healing.” With this intention, Kathy supervised every aspect of the building process, from approving architectural plans to selecting eco-friendly building materials and furnishings. The results shine through on the institute’s campus on Franklin Road in Southfield where they moved in 2002. 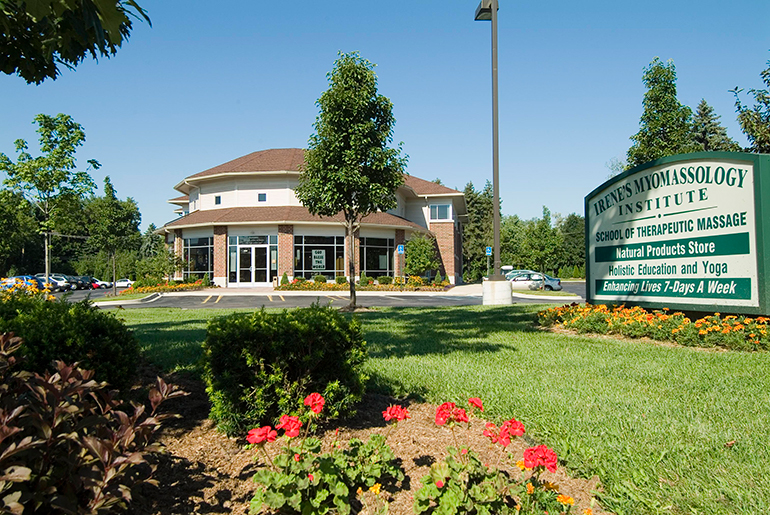 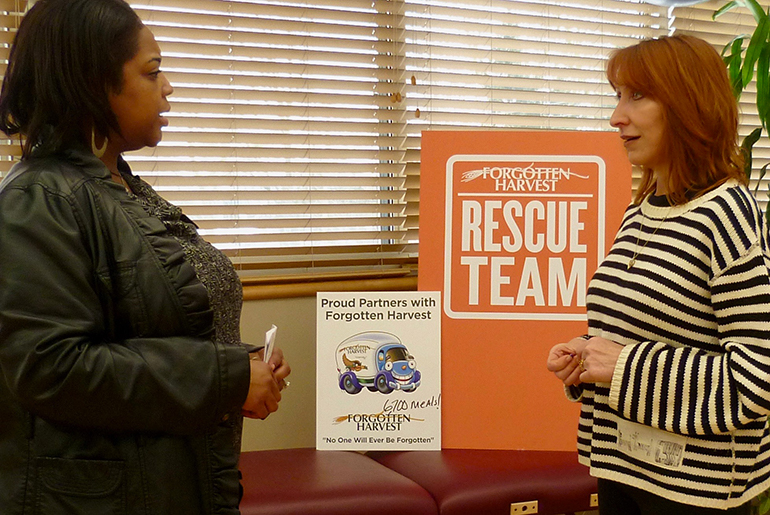 The Joy of Helping Others

In keeping with Irene’s sense of compassion, Kathy finds joy in helping others. Under her leadership, Irene’s Myomassology Institute has partnered with numerous charities at events and donated directly in response to public and private needs.

For its employees, the school is a family, and Kathy has a long generous history of lending to, giving for and caring about that family. She takes great pleasure in making Irene’s an environment of kindness and giving.

Being fully aware of the local economy’s struggles, she provides free massage and cheap yoga classes for the public.

Intensely committed to protecting the best interests of her graduates and continued growth of the profession, Kathy worked tirelessly in getting the State’s Massage Licensure Bill passed. She participates in the Michigan Massage Legislative Coalition to defend and protect the best interest of her graduates and the massage therapy profession. As a member of all the national massage associations, she continues to network with leaders in the profession. She regularly sends her school’s instructors to massage conferences to maintain their professional development and remain current with industry trends.

In keeping with her holistic vision for the school, Kathy has always had a strong desire to facilitate student growth at Irene’s, which motivates her to provide the best program in massage and bodywork available.

She recognized long ago the personal development experience that accompanied her students’ massage education. It brings her great satisfaction to know that each graduate gains an increased sense of self-esteem and inner peace.

Following her mother’s philosophy that we are students throughout our lives, Kathy continues to seek ways to improve and grow personally and professionally. She regularly attends national conferences of the various professional massage associations. 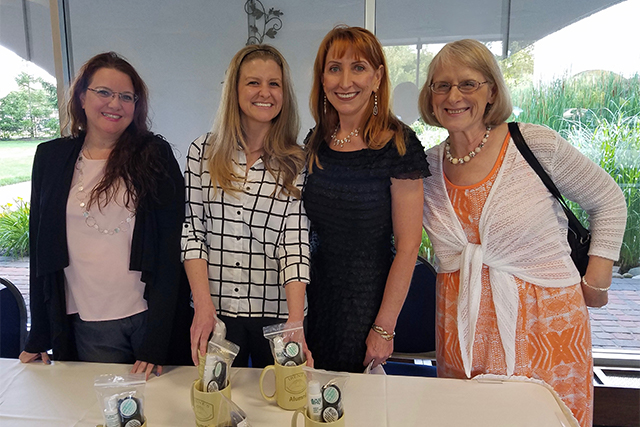 In addition, she goes to lectures and classes held by motivational speakers and spiritual leaders, always looking for elements she can include at her school. Another lesson Kathy learned from her mother is the importance of maintaining good health.

Irene’s voice still rings in her ears saying, “Your body is a temple”, and “Take your vitamins!” This message instilled in her an interest in natural health that led her to include a wide variety of holistic health methods in the curriculum. It saddens Kathy to see such a large segment of the population struggle with health issues that could easily be resolved with lifestyle changes. Students learn good health and nutritional practices in the core curriculum of their massage therapy program. 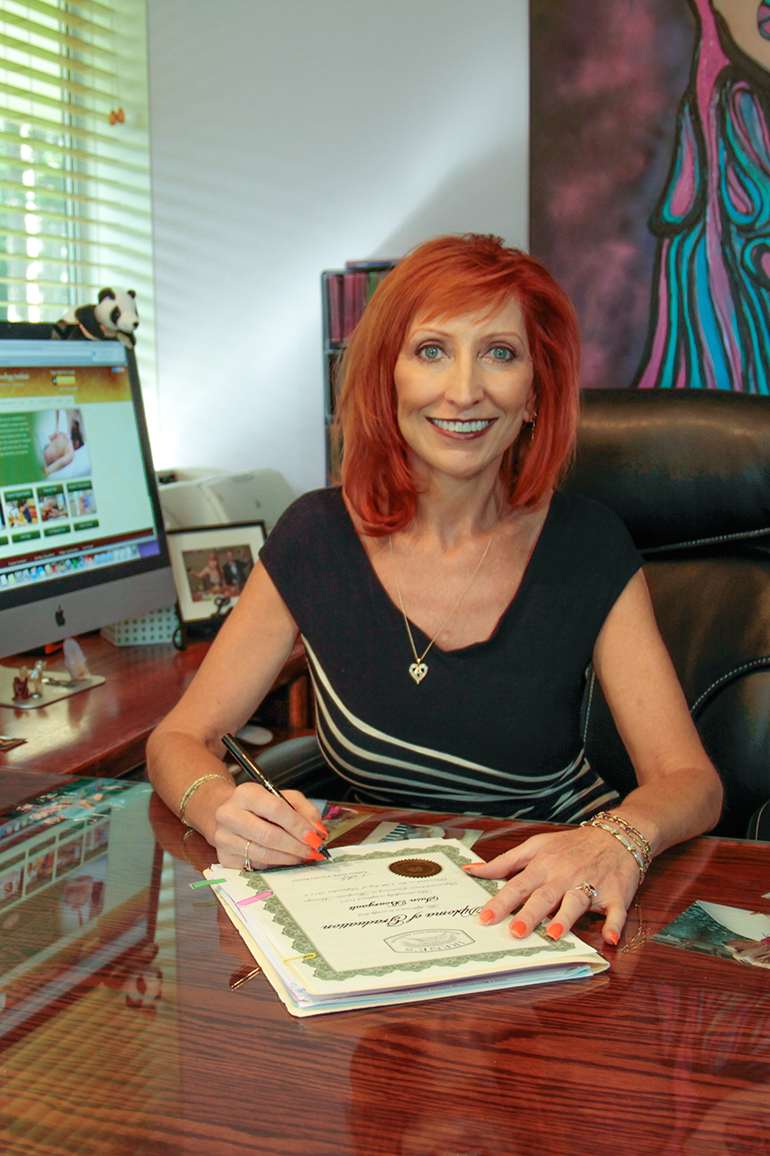 Kathy Skubik now owns the nationally accredited massage school, Irene’s Myomassology Institute, in Metro Detroit. She continues to run it by Irene’s philosophy since her mom passed in 2010.

While she misses her presence daily, she is fully aware of the amazing opportunity her mother gifted her with. Kathy is proud of their school’s success and considers it is an honor and a blessing to provide students with a viable trade and a life-changing experience.

Kathy is also a fervent supporter of eco-friendly green technologies and animal rights and contributes generously to both causes.

She became a vegetarian in 1995 and knowing it’s better for the environment maintains a fully plant-based diet at home. In 2010, she purchased a major solar energy installation for the school, the first of its kind in Southfield.

In 2013 she purchased an American made a fully electric automobile. She is also an avid supporter of Michigan Animal Rescue League, the Humane Society, PETA, and the International Fund for Animal Welfare.

The Future of Irene’s

It seems that much of Kathy’s life led her to promote healthy lifestyles. Her passion for natural health and fitness, environmental conservation, vegetarian diet, and progressive mindset motivates her to continually improve Irene’s curriculum and student experience.

Using the lessons learned during her own wellness journey, students are happy to experience the results of her insistence on only the best for her school. Keeping her eye on the horizon, Kathy intends to continue carrying on Irene’s legacy into the future.

As Irene’s Myomassology Institute continues to flourish, Kathy’s vision remains clear. The school that began as a way for her mother to share her passion and wisdom will remain true to its roots. Sharing health, love, compassion, respect for the Earth and all its inhabitants, and an unrelenting quest to learn and grow is Irene’s legacy, and Kathy continues to carry it forward with pride. 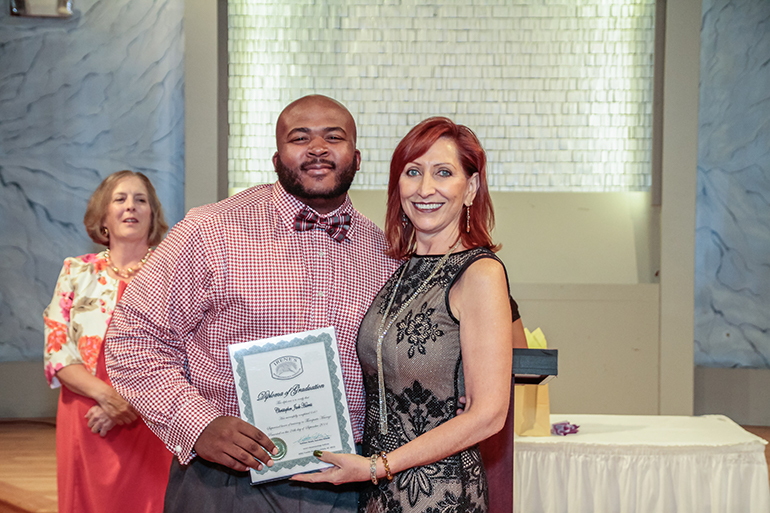 Ready to Get Started?

Come Join Our School and Start Your Career Today!